Ollie is an octopus, and he might be smarter than you!
When Lucy and her friends decide to test how brainy Ollie the octopus really is by seeing if he can get prawns out of a sealed glass jar and photographing the action, they get a surprise when he steals the camera itself.  Can they get the precious footage back?

Told in rhyme, this is a story based on the author’s childhood snorkelling off the beach at Cottesloe, WA when an octopus actually stole their GoPro camera. Others have had similar experiences including one from NSW resulting in a photograph that won the 2020  Ocean Art Underwater Photo Competition 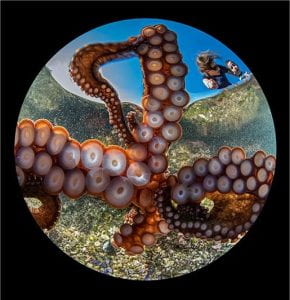 The intelligence of these creatures has been recognised for some time and when one named Paul predicted the winners of the 2010 FIFA World Cup interest in them as a species soared, so this is a great introduction to investigate more about these clever creatures so we can understand and protect them better -they’re so much more than the monsters of the deep that fiction taints them.

The floodwaters are moving down from Queensland and Mullumbimby Jack and his trusty horse must get to the once-a-year Birdsville races before they do if he is to cash his shearing cheque to enter the race and then win enough money to stake his dream of a life of leisure. But there’s a long way to go and a tough race to ride if he is to achieve his dream….

This is a rollicking yarn that takes young readers back to a different time in Australian history and which will have them cheering on the hero in one breath and then sighing with sadness at the end.  Somewhat reminiscent of some of Banjo Paterson’s fun ballads such as Mulga Bill’s Bicycle, it may even lead them on to that great poet’s writings opening up a vast world of Australian history, its lifetstyles and literature. At the very least they will just enjoy an interlude of good, old-fashioned fun while they dream of what they might do if they were ever to win the lottery…

This is our Sydney, the brightest and best of it,
North to the south to the east and the west of it.
Bats and cicadas, lawn bowls and the zoo,
This is our town. Let us share it with you.

As the holidays stretch out, this might be the perfect book to share with young readers to plan what they might do for the next few weeks.  For those in Sydney it could become a checklist of things to see, do and visit, ticking off each item as it is discovered, some of which are as easy as going outside.  While it has places such as Luna Park and the Harbour Bridge, it also has entries like J for Jacaranda and N for nature strip and even learning that Vinegar is a quick antidote for bluebottle stings! And who hasn’t needed U for Umbrella in recent days?  Meanwhile those in other places could be challenged to start building their own alphabet of their region, perhaps creating something that could be offered to the local Information Centre as a guide for tourists – practical and purposeful.

This is the 10th anniversary edition of this gem that offers all sorts of potential once you start thinking about it beyond just a rhyming read.

Simon was shy at the best if times, and luckily for him, being a stick insect meant he could change colours to match his surroundings and hide from those around him.  That was until the day he stayed the glowing pink of the rose he had been resting on!  He was certain that all the other bugs who were gathering for the Spring Fest would laugh at him and the thought terrified him, so when a friendly beetle told him that there would be a magic gypsy moth who would help him, Simon set off in search of this saviour.  But as well as eventually finding her, he also discovered something much more important…

Told in rhyme, this theme of who you are as you are is enough is a common one in literature for young children but it is one that they need to hear again and again in all sorts of situations so they learn that it is okay to be pink or purple, or straight or bent, or spotty or striped or whatever… That no one really looks twice at your differences because they’re too busy involved in whatever else is going on, and if someone does make a nasty comment, then they are not worth your time.  For some, this is not something easily accepted and body image can become a major issue in the future so perhaps they can have fun imagining what it would be like to be able to change colour like Simon and how that would change who they are inside.

As little ones face the challenges of new places, new schools, new people at this time of the year, this is one to help them overcome any anxieties they might have.

One summer’s day in the bush, a lazy lizard finds himself caught in the path of a bushfire! He knows he has to run but is he faster than the flames?

As summer slowly takes hold across the country, the memories of the devastating bushfires of 2019-2020 are rekindled as people watch both sky and weather forecast anxiously. Many will drive through the devastated areas that are slowly recovering and their thoughts will turn to the wildlife that was lost during that time daring to imagine that it will once return to what it was.  This story, written in rhyme, reminds us that the impact on those that live in the bush was as destructive as it was for the humans, and for a much longer time as they wait for their habitat to restore itself, if it ever will.

During that time there were reports of animals seeking shelter in wombat burrows, normal “relationships” forgotten as they huddled together to survive, and this is another story that is based on that.  Young readers will become aware of just how careful they have to be in the bush and surrounds because who knows what might be living just where they are going to put their foot or break that branch as they begin to understand that there are more creatures there than the iconic ones they know and can see.

Five little penguins went out one day
Over the hills and far away.
Mamma Penguin said “Hurry back to me!”
How many penguins can you see?

Combine a familiar ditty with rhyme, rhythm and repetition, add in bright, appealing illustrations and include the interactivity of a lift-the-flap format and you have the perfect recipe for a book that is going to engage our youngest readers.  Not only will they be taken to a winter wonderland where there is so much to see as Mamma Penguin and her chicks waddle through a frosty forest, skate down an icy river and toboggan down snowy slopes meeting all kinds of festive animals playing in the snow but because both the environment and the creatures are not those they are used to seeing, there is all sorts of scope for discussion and building vocabulary.

Most importantly though, this is one that they can return to again and again independently empowering their independence and consolidating their belief and expectation they they, too, can be “real readers”.

A group of little bilbies are hunting for decorations to turn their Australian bush home into a magical Christmas wonderland. As they dance and jump and flap through the bush, they meet a number of other iconic Australian animals, each of which has something to offer to decorate the tree.

With its repetitive refrain and action-packed storyline, this is an Australian story that will get young readers actively involved in its telling bringing it alive for them.  They could speculate on what other creatures the bilby band might meet and what else might be added to the Christmas tree, perhaps even decorate their own unique Aussie Christmas tree with things they find in nature.

The Chaos Before Christmas

The Chaos Before Christmas

Tis the run up to Christmas
and there is so much to do!
At Elf School we are learning
how we can help too.

Elroy McChristmas and his friends are about to sit their final test before Santa decides the best job for each elf. But when it’s time to show off their skills, Elroy’s nerves get the better of him and he casts the wrong spell, sending the classroom  into chaos! Can Elroy and his classmates restore calm before Santa arrives?

Although this has the familiar rhyming style of Clement C. Moore’s classic A Night Before Christmas, this is a unique story that young children will want to hear over and over as they delight in discovering the detail in the pictures, each reading adding something new. And, at a time when awards are being given for this, that and the other, it offers an opportunity for those not in the limelight to think about their own best attributes and skills and consider what job Santa might give them if they were in Elf School.  Because even though Elroy causes such chaos, Santa still finds the perfect place for him!

We Disagree About This Tree

We Disagree About This Tree

Mouse is delighted when Bear brings home a Christmas tree – but that’s when the trouble begins.  They cannot agree on how to decorate it – mouse-scale or bear-scale. Baubles or tinsel? Fairies at the top or a manatee?

This is a LOL story-in-rhyme (which exploits all the ways to make the “ee’ sound) that follows There’s a Bear on My Chair and There’s a Mouse in My House  that young readers will love, particularly if they have helped decorate their own tree. They will hold their breath as the inevitable happens and the tree topples and delight at the ending when the two reach a compromise – or do they?  Older readers can enjoy it too as an intro to the tradition of the Christmas tree if they are investigating the origins of some of the customs that persist today, despite the Australian Christmas being so different to that winter wonderland fantasy.

We’re Going on a Present Hunt

We’re Going on a Present Hunt

Three children are off on a hunt for the perfect Christmas present! But first they’ve got to get through the spiky Christmas trees, a herd of hungry reindeer, some noisy carol singers and a very busy toyshop! But there are SO MANY toys . . . will they ever find the perfect present?

Set to the familiar rhyme of  We’re Going on a Bear Hunt young children will delight in reading along with this story and it’s quirky ending – there’s definitely a bear!  The colourful illustrations will attract their attention and then discovering that they can read it already will help them believe that they too, can be “real readers”.  Not to mention getting them to think about what if this were and Australian story – what would change and what would they substitute.