Women Who Led the Way

Women Who Led the Way

“From Aud the Deep-Minded, an early voyager to Iceland, and Sacagawea who guided the Lewis and Clark expedition across the USA, to Mae Jemison, the first black woman in space and Arunima Sinha, the first woman amputee to climb Mount Everest, this book shows the incredible courage, determination and power of women explorers over the last 1200 years. These women have led the way exploring lands, oceans, mountains, skies and space, but have also made pioneering discoveries in the fields of science, nature, archaeology, ecology and more. The lives of these women, told as personal stories, are an inspiration to us all.”

As I looked back over the increasing number of reviews for books that showcase women who have changed the world in some way, none of them have focused on female explorers breaking through that traditionally male domain peppered with names like Marco Polo, Christopher Columbus, Abel Tasman, James Cook, Robert Falcon Scott and Edmund Hillary. (Even the Australian Museum’s Trailblazer collection is predominantly men.)

In fact, when I looked through the contents page, there were only three names of more than 30 that were familiar, yet here are the stories of women who broke new ground in so many areas including being the first to cycle round the world, the first black woman into space,  the first to look into space and discover eight comets…  One wonders why they are not household names like their male counterparts.

However, apart from a brief mention of Nancy Bird Walton, there were no Australian names suggesting that perhaps there have been so many women to choose from that Australia’s heroes were overshadowed.  Where are Kay Cottee, Jessica Watson, Emily Creaghe, Lady Jane Franklin, Jade Hameister, Robyn Davidson,.. even my own mum, Dorothy Braxton, the first female journalist to travel to Antarctica and the first female to set foot on some of its hallowed places in 1968 (although, to be fair, she was a Kiwi through and through)? 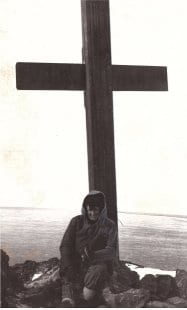 So, as well as learning about these trailblazers, the book needs an Australian companion so we can set students the challenge of not only researching someone suitable and retelling their story in the same format as the book – brief personal accounts and which include an inspirational quote – but also pitching for their contribution to be included. Obviously, such a book can only have limited entries so students would have to argue why the contribution of their selection changed the world while the rest of the class would take on the role of the editor choosing.

Alternatively, it could be ties to this year’s CBCA Book Week theme of Dreaming With Eyes Open and students could write about why, in the future, they would be included in such a collection.  What will be their legacy?

Books like this, apart from always introducing the reader to new heroes, open up so many more possibilities that can make each of us an explorer in our own way.