Sage Cookson, daughter of globe-trotting celebrity chefs Ginger and Basil, is on the move again.  Sad about leaving her best friend Lucy behind for Christmas, nevertheless she is excited about going to Western Australia where her parents are going to be supervising the creation of the world’s largest pavlova in an attempt to break the record for this dessert, currently held by its country of origin, New Zealand.

Too large to be baked in conventional ovens, the action takes place in a disused brickworks where the kilns are large enough to accommodate it, and there will be live crosses to its creation and success (or otherwise) during the annual carols by Candlelight program broadcast on television in the eastern states.  Despite a definitive ruling,  this concoction of sugar and egg whites has been the subject of dispute since it was first created and served in 1927 in honour of ballerina Anna Pavlova’s visit to the two countries in the 1920s and this becomes the centre of the conflict.  Are all the little things going wrong or going missing the work of a malevolent Christmas ghost or a saboteur…

This series for newly independent younger readers combines the author’s love of television cooking shows and mysteries, so that in each new addition something goes wrong and Sage has to solve the problem. Will she get to the bottom of this mystery and enable Australia to claim the record or will it stay where it belongs, in New Zealand?  Sage is going to appeal to a range of young readers who will be able to follow her adventures and then visit her website for more fun. Learning to make proper pavlova is something we Kiwi kids learned at our mother’s elbow, but there is a recipe included (very similar to the original, proper one) that more adventurous young cooks might like to try. 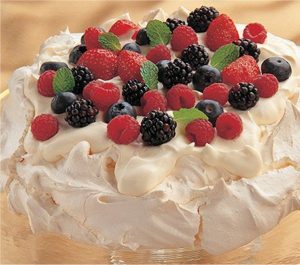