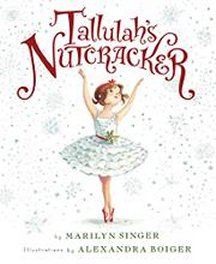 Christmas time means it is time for the popular perennial performance of Tchaikovsky’s The Nutcracker based on the original story by E. T. A. Hoffman and budding ballerina Tallulah is very excited as she has won a role as one of the mice.  She is convinced she will be the best mouse ever and practises very diligently, turning down social invitations and inviting everyone she knows.  Even when she discovers the role is more about scurrying around wriggling her paws rather than doing eye-catching ballet moves, she doesn’t get discouraged,

But on the night things don’t go according to her plan, and her performance is not what she dreamed it would be, so she scuttles off and hides, too ashamed to face even her family.  And when the ballet master, Clara and the Sugar Plum fairy come looking for her she is sure her future as a ballerina is over before it gets started…

This is a story that will appeal to all those who aspire to being the Sugar Plum Fairy one day with its gentle but realistic storyline and charming watercolour illustrations.  For those who are familiar with the story of The Nutcracker it takes on a new dimension and for those for whom this is new, not only will it help explain the prevalence of nutcracker decorations in stores at this time but it will also lead to one of the classic Christmas time stories, and perhaps even a performance of the ballet!

Worth tracking down for the ballerina who likes to read!