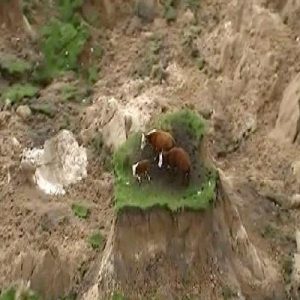 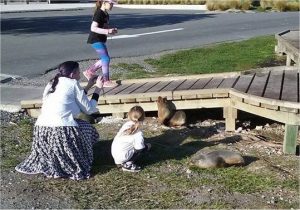 Sage Cookson is a ten-year-old whose parents, Ginger and Basil, travel Australia and the world, and lucky Sage gets to go with them. While they are sampling the food, learning new cooking techniques and then sharing their new knowledge with their massive television audience through their show The Cookson’s Cook On, Sage has a lifestyle that others might envy.

However, in each episode she gets into a scrape that she needs to get out of.  In the first book, Sweet Escape  there are problems with a famous chocolatier while in Ring of Truth she is accused of stealing a treasured ring. Her friend Lucy travels with her to Crystal Bay in Fishy Surprise but the return of an old adversary causes issues and in Singapore Sensation things go wrong when a lady with pink hair starts to stalk them.

This new series for newly independent younger readers combines the author’s love of television cooking shows and mysteries, so that in each new addition something goes wrong and Sage has to solve the problem.  Despite the glamorous backdrops of each story, food is the focus so all the budding Junior Masterchefs can enjoy reading about cooking, trying the recipes which are included and then visiting Sage’s website  for more.  With four books in the series so far, Sage is going to appeal to a range of young readers who will be able to follow her adventures without having to wait for the next one. Perfect for the upcoming cooler days when reading is the best thing to do.

Usborne Illustrated Myths from Around the World

Usborne Illustrated Myths from Around the World

What do Demeter and Persephone, Finn MacCool and the fish of Maui all have in common?  Well, they are included in this collection of stories from around the world beautifully illustrated by Anya Klauss.

In times long past before the truth was known, many of the things like the sun’s passage across the sky or the formation of the land were a mystery to those observing them so they made up stories to explain the particular phenomenon.  Even though they came from far-flung places and diverse peoples. their common thread was to explain the seemingly inexplicable so that the world made sense to them. Whether it involved giants, mythical beings and creatures, magic or sorcery, each story sought to demystify and through their telling through generations across thousands of years they have endured, even though science may have intervened to expose the truth.

As well as being a wonderful introduction to these sorts of stories and embracing a range of cultures, such myths can also be the entry point into scientific investigations for young and not-so-young scientists.  If Maui did not fish the North Island of New Zealand out of the sea, how did it get there? If the changing of the seasons are not caused by Demeter’s love and loss, how are they formed?  A great way to link literature and science and start our students on their own quests.

Many people live in the tall apartment block, each living their lives without even knowing their neighbours let alone socialising with them.  They didn’t even say hello to each other in the corridors! That is, until the baby moves into an apartment on the 8th floor. And like babies do because they have to, the baby cried, and cried a lot no matter how much his mother try to calm and soothe him.  His cries could be heard all over the 8th floor.

And then one day, when he was a little older he found the pits and pans, as babies do, and of course he clanged them together, as babies do. His mother screamed in delight and the CLANG, AHHH could be heard in every unit.  And something amazing began to happen…

This is a charming story that takes the everyday event of a baby crying and turns it into a tale that many will resonate with .  Exploiting her personal passion for music, the author has shown that there is music  in anything, it can come from anywhere and can creates harmony, and not just the musical kind. Guiseppe Poli’s little vignettes capture the lives of the people in the apartments, emphasising their separation whilst providing little clues for what is about to happen, and the things they share like the teacher who teaches drama and the teen creating movies; the girls and the older lady both enjoying knitting that suggest this baby is going to be the catalyst for some enduring connections.  Even the front and back endpapers suggest that there will be a remarkable journey taking place between them.

On the surface this appears to be just a book for our very young readers whereas it has a place for older readers too, especially if it is shared by a teacher with a purpose.  There is the theme of isolation even though the people live so close together and the theme of friendship through common interests that can be explored, while there is also the fun of making a body band – using the parts of the body to make a sound and a rhythm that can be melded together and then the exploration and combination of the sounds of ordinary objects.

Diane Jackson Hill started writing children’s books including the wonderful Annabel’s Dance after a long career in teaching, and her understanding of what children want in a story is very clear. This should become a family favourite as who can sit still when all around music is being made.

High in a very tall tree Digby Fixit hears an unusual and very noisy noise.  Being a lover of music he scrambles down the tree to discover who is making it. Perhaps it is one of his very-bestest friends.  Is it Stanley strumming his guitar? Or Sophie tooting her kazoo? Perhaps it is Freda on the piano or Theo thumping his drum.  Maybe it is Wilfred on his double bass or Tarquin tapping the sticks.  No.  None of these and the noise was still noisy.  So using his trust noise-o-meter he followed its lead and found…

Written in rhyming verse to echo the passing of time and the rhythm of the music, author Renee Price has used her early childhood teaching and music educator experience to bring an engaging tale to young readers, introducing them to a variety of common instruments and their sounds along the way. Full of energy, fun and colour, readers are taken on a journey that will have them showing you their knowledge of the movements and sounds associated with the various instruments and then wanting to join in the jam session at the end- which they can do because there is a recording of the song that can be downloaded via the QR code provided.  They will also recognise that final sound that brings the music to an end – but not the fun.

Illustrator Anil Tortop has also hit the mark with her illustrations – each set on a background of a bold, solid colour and capturing such a wide range of action and emotion in clever, unfussy strokes that even include an intrigued cat. And, as with many characters, Digby now has his own website so the fun can continue.

An original storyline that teaches children a little about musical instruments (a change from Peter and the Wolf),  a little about the passage of time and a lot about curiosity, friendship and fun will be a welcome addition to home and library collections.