A century ago.  Young Australian men were volunteering to got and join the forces fighting in World War I, seeing it as the greatest adventure of their lives and a way to escape the humdrum and hard times of home.  When James left, Annie stitched the name ‘Digger” on her favourite patchwork toy kangaroo and gave it to him as his farewell present.

“A Digger for a digger”, she said.

Off went James and Digger  together, across endless, tireless seas and vast starry night skies to the battlefields and trenches of France.  And when the order came to advance, Digger was in James’s pocket.  He was there too, when James was evacuated to a French farmhouse to recover from his injuries, and Digger was mended too, this time by Colette who carefully replaced all his broken stitches. And he was still there when James was well enough to return to his unit.  He is even there when the worst happens…

Inspired by and written as a tribute to the French schoolchildren who once tended the graves of Australian soldiers who died on the Western Front in the heroic battle for Villers-Bretonneux in April 1918, this is a touching story gently told and illustrated that brings the human side of war to life as well as commemorating the connections made that still live on.

As the final centennial commemorations of this terrible time draw to a close, this is a special book to share as it demonstrates how the thinnest threads can connect us through the toughest time, and love and harmony and safe haven can grow from the smallest things.

A superb addition for Remembering Gallipoli 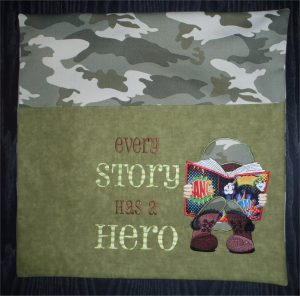 Every story has a hero