As “mornings come with ash grey light, daytime nibbling away the night” Old William, the town baker, slides crusty loaves and fancy buns out of his ovens, steaming and fresh with an aroma that can never be forgotten.  Alongside Old William is his grandson Young Billy, helping out before school and learning his family’s trade in the traditional way, while, outside, Horace the baker’s horse waits patiently as Big Bill loads them into the baker’s cart to be delivered to the townsfolk. Life in this town, like many others around Australia of the time, is lived in a different way and to the beat of a different drum – the sound of horses’ hooves as they plodded around the town pulling distinctive carts and making their daily deliveries of bread and milk and ice and vegetables and meat, even rabbits!  Their route was as familiar and predictable as the routine of those who prepared the goods they delivered. The merchants knew their customers and their regular orders, and their horses were as much a part of the community as the children who loved them.  (Many spring roses owed their magnificence to the gifts left by the horses.)

But it is 1919 and the scourge of Spanish flu is sweeping the nation.  Even Old William is not immune and to Horace’s dismay he slumps to the ground unable to carry on.  Horace’s whinnies wake Big Bill and Young Billy and they find themselves doing the jobs that three used to do, and then Young Billy finds himself having to do it all.  At night he carries wood for the fire for the ovens, makes and mixes the dough, kneads and shapes it, cooks the loaves and buns and then piles them into the cart to deliver them.  Clearly too much for one little lad but he knows that if his family and friends are to recover they need the bread so they can have something to eat to regain their strength.

But what happens when Young Billy just cannot make bread all night and then deliver it all day?

This is a story dear to author Jackie French’s heart because it is one from her own family.  When the Spanish flu decimated populations (killing more people than World War 1) many of the deaths were because people just had no one to care for them.  Jackie’s great-grandmother made vats and vats of stew but while the protein and vitamins were essential, it was the carbohydrates in the bread that gave the energy to push on.  So, inspired by the stories that her grandmother told her and Bakery Cart No. 168, an exhibit at the National Museum of Australia, Jackie has crafted this wonderful story that is not only a story in and of itself but is also an integral part of the story of our country, of life in another time, of people whom we will never know again. Through Young Billy and Horace, neither of whom were unique, another thread has been woven into the fabric that is Australia.

Combined with the exquisite illustrations of Peter Bray who has created a visual mural of life in post-war Australia and captured the essence of the people who lived it, this is the perfect example of how we can engage even the very youngest student in times that have gone before.  Even though their grandparents’ memories might not stretch so far back (unlike Jackie and me), nevertheless Grandma and Grandad may well remember stories told to them by their grandparents that can be shared again and the thread continued. Just as my child was amazed that my New Zealand childhood did not include television, so his children are amazed that his did not have the internet, and while it was confronting when they first asked me, “What was life like in the olden days, Grandma?” nevertheless it was an opportunity to tell them of a life spent roaming the shoreline as free as the seagulls above me – a life that came to life for them when I took them “home” a few weeks ago.

What is my history and how do I know?

What stories do other people tell about the past?

How can stories of the past be told and shared?

Horace the Baker’s Horse is the perfect way to show how our history is told through story and to encourage our students to discover theirs, share and compare. Even at the launch in Canberra yesterday, audience members were sharing stories about the anticipation that the smell of a hot loaf of bread evoked and the scoldings endured because the centre had been eaten out before the loaf reached home!  If Jackie had been able to eavesdrop, she might have gleaned the material for another book! 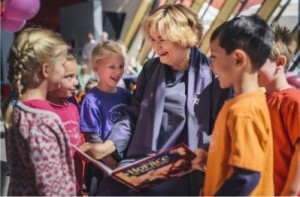