Charlie Smith and his cousin Rupert Swallow beg Charlie’s mother to allow them to go to the beach and with her warning of “no shenanigans” ringing in their ears, but quickly forgotten, they set off.  It’s a glorious day and the boys are soon in the water with Charlie floating way out past the breakers watching the seagulls and vowing that one day he will fly like them. But when it comes to heading back into shore, they realise how far out they are and they are in trouble.  And this is 1907 with no such thing as red and yellow flags and highly trained and well-equipped lifesavers on the beach…

The rescue that then took place, performed by bystanders on the beach, became the catalyst for awareness and change – seven weeks later on 21 February 1907 the Bondi lifesaving club was formed, the foundation of the Surf Bathing Association of New South Wales officially promulgated in October that year and the nucleus of what we now know as Surf Lifesaving Australia. It was the work of the surf bathers on the beach and Nurse Sadie Sweeney that demonstrated that there needed to be and could be a way to help those who got into difficulty in the surf and after the formation of the Bondi club, clubs were also formed at other Sydney beaches, eventually becoming the familiar and vital service we have today.

But to add a twist to the story, Charlie was Charles Kingsford Smith who realised his dream of being able to fly like those seagulls, and changed to path of aviation in both Australia and the world.

With summer coming and record temperatures already meaning our beaches are the place to be for so many, this is a timely publication with its story of how those red and yellow flags came to be and its strong message of surf safety, particularly of being able to recognise a rip and what to do if one is caught in it.  (Sadly, there has already been one drowning this season because of not knowing this,) We don’t learn who Charlie is until the very end, so we are able to focus on the boys’ predicament and the actions of those who saved them – the story is clearly about the event rather than the characters – and the fact that he went on to be famous is almost incidental.

The author, Dr Stephanie Owen Reeder  must have her own desk at the NLA  in Canberra because she has built up an impressive body of work using their resources to tell our history in a way that is interesting, accessible and engaging for our younger students.  Briony Stewart’s illustrations takes us back to the fashions and culture on 1907 prompting discussions about the “neck-to-knees” as well as why the majority of those in them are male. And as usually with NLA publications, there is further information at the back for readers to learn more and follow up. And while Rupert Swallow’s story is largely unknown, there is always that of Charlie’s to explore… 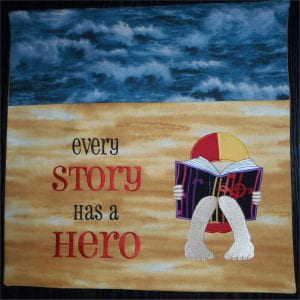 Available to order from Storybook Cushions