In the early 1930s, living in the southernmost port in New Zealand, a young girl watched through her bedroom window at ships departing from the wharf heading south for Antarctica.  They fired her imagination and inspired her to learn all she could about this unknown continent and her personal hero, Robert Falcon Scott, vowing that one day she would follow in his footsteps.  This she did in 1968, becoming the first female journalist to go South and while she didn’t get to the South Pole like her hero, she did get to visit his memorial. 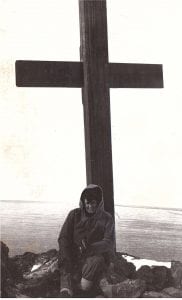 Her love of the Antarctic was passed on to me, her daughter, and by the age of 10 I had already read The Worst Journey in the World by Apsley Cherry-Garrard, a member of Scott’s final expedition. One of my earliest writing memories was deciding to write my interpretation of that expedition, and an enlightened teacher allowing me to skip all the other lessons for the day as he realised I was gripped, on a mission and interruption would have been disastrous.  He even lent me his fountain pen so I didn’t have to keep dipping a nib into the inkwell and blotching my missive.  While that essay has disappeared somewhere in the last 57 years, I still remember the comment he wrote – “This is the best essay on this topic I’ve read from a child of your age, ever!”  Although my passion for the ice in general waned as other interests took over, my mum’s remained and the stories of Scott were common conversation in our household for many years.

So to see a new book emerge focusing on the events of 1910-1913 that would bring the story to a new generation, the great grandchildren of my mum, was exciting and I knew I had to read and review it, so other children could learn about real-life derring-do just over a century ago and Miss 7 and Miss 12 could have a better understanding of what had shaped them, the legacy that has been left and be inspired to create and chase their own dreams.

Told in present-tense narrative that makes the reader feel part of the adventure, rather than an observer of facts or the consumer of a diary, it follows the journey of the Terra Nova from Dunedin’s Port Chalmers through the wild Southern Ocean and then the expedition to one of the last unconquered destinations that lured men like Robert Falcon Scott and his crew as they battled not only the extraordinarily difficult conditions with just ponies, dogs and wooden sleds but also time as they strove to be the first, knowing that Norwegian Roald Amundsen was on a similar mission coming from the other side of the Ross Ice Shelf.

Even though the outcome is known before reading starts -“If you’re into happy endings, you’d better look elsewhere. This story does not end well” – nevertheless the reader hopes against hope that history will be rewritten and that this band of men who so willingly followed another into the deepest of unknown territories, who never gave up on themselves or each other, would pull off a miracle like the recent rescues from that cave in Thailand.

A finalist in the New Zealand Book Awards 2018  this is one for those who like their superheroes to have been alive and real; who like to delve into a time gone by when the world was very different and who like real-life adventure.  But my copy is for two little girls who know and loved their own superhero, one who had a dream and followed it and inspired them to follow theirs.