It is a calm, peaceful sunny morning where everything is as and where it should be, including Scarface Claw snoozing in the sun on top of the roof of the car.  But all that changes when Tom starts the car and drives off without realising Scarface is still on top!!!

Is there any more famous cat with young children than Scarface Claw? He’s the toughest tomcat in town, the roughest and toughest, the boldest, the bravest, the fiercest, mighty and magnificent – so much so that he sent Schnitzel von Krumm with a very low tum, Bitzer Maloney all skinny and bony, Muffin McLay like a bundle of hay, Bottomley Potts covered in spots, Hercules Morse as big as a horse and Hairy Maclary from Donaldson’s Dairy scampering home with just one EEEEEOWWWFFTZ way back in 1983!

And now it is Scarface Claw’s turn to be terrified as he clings on for dear life to the roof of Tom’s speeding car.

This new adventure from Dame Lynley Dodd told in rhyme with all the action and wonderful illustrations of the others in this fabulous series for young children is set to introduce a new generation to a host of characters that have brought so much joy that they have their own sculpture in Tauranga in New Zealand.  (In fact, Hairy Maclary is such a part of my reading story that, despite the pouring rain, I chose to find this sculpture instead of accompanying the family to Hobbiton.) 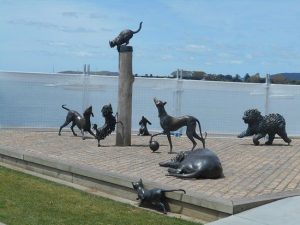 Every child needs to know Scarface Claw, Hairy Maclary and the rest of the gang – this new tale will be a great introduction and is icing on the cake of a brilliant series for existing fans.