The World of Roald Dahl

The World of Roald Dahl

Even though it is almost thirty years since Roald Dahl died, his characters are such household names with young readers that there are few who would not have read at least one of his stories.  And even though Dahl might have passed onto the greatest storyland, illustrator Quentin Blake is still with us and sharing his iconic graphics in this latest book that sets the reader all sorts of activities to do, games to play and puzzles to solve.

Beginning with a brief biography of Dahl including some fascinating facts like his birthday being September 13 and thus spawning annual celebrations on Roald Dahl Day ; and a similar though less familiar introduction to Quentin Blake, there are tips about bow to be a storyteller like Dahl followed by a host of other engaging, interactive pages that build on the stories and the characters bringing them to life. And once all the challenges have been completed, the successful reader can call themselves a World of Roald Dahl Superstar with an appropriate certificate.

Miss 9 adored the Dahl puzzle books and boxed set she found in her 2019 Christmas stocking and was so excited when her 2020 school year was devoted to exploring his works.  Imagine how much more she will bring and be when she discovers this one! In fact, with winter dragging on and Term 3 being the longest ever, she might discover it sooner than later! A reward for the days and days spent at home with none of her usual distractions.

Remember this … “Out of the gate and off for a walk went Hairy Maclary from Donaldson’s Dairy …” and by the time you got to the end of the book he had been joined by his mates Hercules Morse (as big as a horse); Bottomley Potts (covered in spots); Muffin McLay (like a bundle of hay); Bitzer Maloney (all skinny and bony); and Schnitzel von Krumm (with a very low tum). How proud and posh they were until they met …

Almost every child born in New Zealand or Australia in the last 30 years knows what happens next! Who could bring down such a bold band of brothers?

Children love the sound of the rhythmic and rhyming language and the repetition of the characters on each page which make it a perfect read-aloud  as your listeners will be joining in and eagerly anticipating who will join this canine crew., as well as enjoying the pictures which work with the text perfectly, as they should. The board book format makes it perfect for little hands, ensuring that this will be much-loved by this generation as those before.

And it is fitting that on the 5th anniversary of forgoing a trip to Hobbiton in favour of finding the sculpture to this remarkable dog and his mates on Tauranga in the pouring rain, that it is time to remind our new parents of this classic series so another generation can be as enchanted with him as all those of the last 30 years. 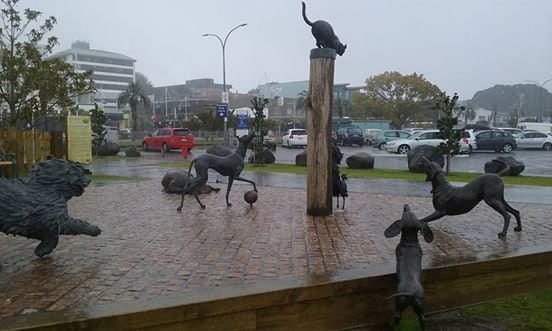 It’s dinner time and Mama Dog is looking for Spot.  Where can he be? Under the rug? Behind the door? Inside the clock? He’s playing hide-and-seek and there are so many places a little puppy can fit into.

As well as having the joy of lifting the flaps to discover Spot’s hiding place, our youngest readers can also have the fun of predicting where he might be and whether he could be in the places Mama looks, at the same time learning important place words like under and behind and so on.

This is the 40th anniversary of the publishing of this first in the series about this little dog and so it is in a stunning ruby foil cover that attracts the eye as much as the illustrations. Judging by the number of requests for Spot-related fabrics and so forth on a FB group I belong to, this little fellow is as popular as he was when he was first introduced all those years ago. And given the stories have sold 65 million copies in over 60 languages, his appeal is universal.

To add to the delight, there are activities to be done so children can party at home with Spot during these shut-down times, and share in this special reading of the story.

Perfect for starting our very youngest on their reading adventures.

There’s a Hippopotamus on Our Roof Eating Cake

There’s a Hippopotamus on Our Roof Eating Cake

When Dad notices that there’s a hole in the roof, his imaginative daughter decides that there is a hippopotamus up above eating cake that’s causing it. and even though it works part-time at the zoo it always returns to share the adventures she has had that day, even when she’s been in bother. Eventually men fix the leaking roof, but they don’t see it because it clambers down the ladder when they are not looking, but the little girl is convinced the hippopotamus will be back that night. In fact, it is likely it will be on the roof or accompanying her on adventures all through  her childhood.

When this was first published in 1980, it became such a favourite that it has been published continuously for 40 years and has evolved into a series of seven picture books, and inspired a young readers’ novel, classroom play scripts, a musical production for the stage and a short movie, as well as having been translated into Auslan and Braille.  There would be few children who have not been exposed to the story in one format or another.

With its rhythmic, repetitive text and simple line drawings depicting the hippo as a friendly fellow, the appeal of this book and it premise of imaginary friends has been tested over time and this special anniversary edition has a special cover to make it a collector’s edition while also revitalising the character for another generation.

Forty years ago, even very young children knew who the Greek mathematician Archimedes was as they explored the physics of water displacement alongside him as he tried to work out who was responsible for making the bath overflow when he and his animal friends got in. Is it Kangaroo, Goat or Wombat?  Surely it can’t be Archimedes himself????

In this celebratory anniversary release of this favourite children’s classic, a whole new generation of children can explore the same phenomenon with new teaching notes written by me!  Work science and maths into your program to demonstrate how the information literacy process is embedded  across the curriculum and set up your students for a load of fun as they replicate Mr Archimedes’ investigations!!!  And introduce them to a classic story at the same time, one they will be wanting to share in another 40 years.

There are some stories that have stood the test of time for generations and Aesop’s fables are among these with their messages still pertinent even in this age of screens and technology.  So this new release of these old tales written and illustrated for young emerging readers will open them up to a new generation.

The Lion and the Mouse tells the story of the arrogant lion who cannot imagine that a tiny mouse would ever be able to help him but discovers that friends can be found in strange places; The Ant and the Grasshopper reminds us about the need to balance work and play as Ant busily prepares for winter, while Grasshopper sings the summer away; and The Hare and the Tortoise  pits a boastful hare against the slow tortoise with a surprising result.

Knowing these sorts of stories which are the basis of many other stories enriches the young child’s literary knowledge and adds depth to their understanding of those other stories so to have them available in the library’s collection is essential, in my opinion.

Living with the Browns in London is very different from Paddington’s original home in Darkest Peru and there is much to see and do and absorb.  Using Michael Bond’s original stories, Paddington reflects on the changes and writes letters, draws maps, and creates other mementos, each of which is enclosed in its own envelope waiting for the young reader to discover and read.

Since his 60th anniversary in 2018, there has been a resurgence in love for this childhood favourite and this is another opportunity to share the love with a new generation.  Children love stories that have letters that they can pull out and read – it adds an extra layer of intrigue and mystique – and this will be no exception.  It might even inspire them to write to Paddington and tell him about where they live and the things they like to do.

A long time ago, in a country far away, a star shone in the night sky and a baby boy was born . . .

In this new release of this age-old story, illustrator Jess Racklyeft has captured the Christian version in her unique style that has led to her being included in the CBCA Notable Picture Book of the Year two years running. Modern in design and detailed with vignettes that highlight the joy and wonder of the occasion, this is a distinctive interpretation that can be shared over and over with new tings to discover and discuss. For those who know the story, the text is hardly required because the illustrations tell it themselves; for those for whom it is new, the text gently complements the artwork making it easily understood by even the youngest listener.

A worthy addition to the Christmas Countdown collection.

It’s a cold, snowy Christmas Eve and everyone is at home waiting for a special visitor…

Little ones will adore this new story featuring the Very Hungry Caterpillar as they lift the flaps to discover who is hiding behind.  With its northern hemisphere focus  offering the opportunity to talk about why Christmas is so different from here, they will enjoy searching for the VHC because although he doesn’t play an active role in the story, he does appear on each page sharing the precepts of the Christmas season in simple text and classic Carle illustrations which will help focus their thinking to predict the story and who might be hiding.

A favourite friend in a familiar setting and a recognisable author – has to be a Christmas stocking winner.

Thirty years ago I discovered a lovable character that has been an integral part of the lives of the very young students I’ve taught and my grandchildren – a patchwork elephant called Elmer. Every time his creator David McKee offered a new story, it was in my hands and in the ears of the nearest children.  So now, to have a collection of the five earliest stories in one volume is heaven on a stick for such a fan.

Featuring Elmer, Elmer and the Rainbow, Elmer and the Lost Teddy, Elmer in the Snow, and Elmer’s Special Day, just five of the 27 stories in the series, the little patchwork elephant who likes to play jokes on his friends but is always compassionate and helpful, is set to make a whole new generation of fans as parents discover this childhood favourite all over again.

And to celebrate his 30th birthday, there is a new story called, appropriately, Elmer’s Birthday. Hoping to get their own back on him, the elephants decide to play a joke on Elmer on his birthday and spend the day getting all the other animals on board.  But who has the last laugh?

Great for teaching children about elephants, the animals of the jungle, colour and patterns, as well as the themes of each story, I believe little ones have not had a real education if they don’t meet Elmer. These two are going straight to my version of the pool room!