More than a Kick: Footy, the Photo and Me

More than a Kick: Footy, the Photo and Me

Sunday, March 17, 2019 and Tayla Harris goes to work as normal, just as she has every other day. But this was to be no ordinary day – not only was it the last round of the AFLW home-and-away matches to determine which team would be in the finals, but it was the day Tayla was propelled into the media in a way she never sought nor wanted.

During the match, she kicked a goal and photographer Michael Wilson snapped the action as it happened.  Ordinarily, it would be no big deal but when it was published online to showcase her amazing athletic ability, suddenly the faceless trolls who hide behind their keyboards decided she was fair game and the photo went viral, along with a plethora of nasty comments that turned it into something it was not. Rather than being a photo of an athlete at work, it became a war of words – a war that hit the headlines here and overseas. And because 7AFL chose to remove the photo rather than hold the trolls accountable, it attracted even more attention. 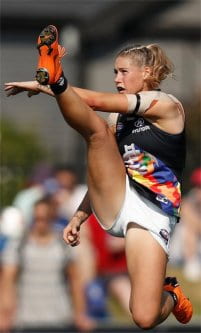 In this frank and very personal memoir of that time, Harris speaks directly to the reader about the impact that it had on her as an individual and as a footy player and her concerns for herself, her family and the families of those who felt it was OK to write what was essentially sexual abuse. She notes that she was “lucky” because she had a manager, a family and a community who rallied around her to support her through the furore, but she is very concerned for those who suffer similar bullying and do so, alone and often in secret.

Whether readers are footy fans or not, know who Tayla Harris is or not, this is a powerful story that shows the power of social media and the consequences of those faceless remarks that so many seem to think they have the right to make.  For our girls wanting to aspire to the highest level of sport, it is inspirational; for those who are suffering at the hands of these anonymous cowards it offers hope and guidance; for those who write such trash, it is an eye-opener into what their words can do.  For Tayla, it resulted in a statue in Federation Square and a boost to women’s football that was unprecedented, but sadly, for some like Dolly Everett it is a burden too tough to bear.  That’s why, despite not usually reviewing books for the age group that this is written for, I’m sharing Tayla’s story because this is a story that needs to be heard over and over and over – until the haters and trolls are held accountable and responsible for their actions. 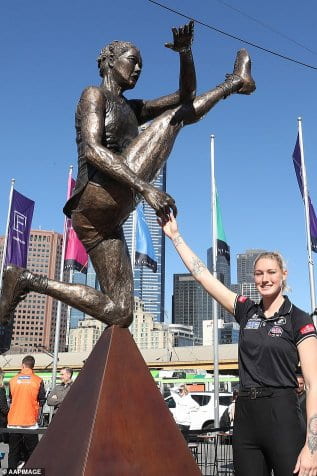