Taking the Lead: How Jacinda Ardern Wowed the World

Taking the Lead: How Jacinda Ardern Wowed the World

In 2017 Jacinda Ardern was elected Prime Minister of New Zealand,  an event that history has shown doesn’t really rate headlines in Australia. But this Kiwi PM is now as well-known here as her Australian counterpart and even when she pops into a cheese shop on a private holiday in Queensland it makes news. 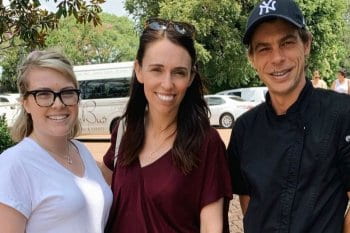 Sadly, it has been a series of tragedies that have propelled her onto the world stage but nevertheless, through those catastrophes young people have seen what a real leader looks like and can inspire, encouraging them to become involved in the broader spectrum of their own lives. This illustrated story of her life from her high school days when she was compelled to help her classmates who were too poor to afford shoes, to her desire to be a clown and then a scientist, tells a story of a young woman driven by compassion and empathy and a need to make others’ lives better and the world a healthier place to live.

Written to engage a primary school audience so they too can understand and believe that nobody is too young to start changing the world, this is the latest in a new series about inspirational New Zealanders that includes Hero of the Sea; Dinosaur Hunter; Sky High; First to the Top and Speed King. As well as introducing our younger readers to Ardern, a contemporary name they are probably familiar with and opening up conversations about the qualities of leaders, Taking the Lead also provides entry into biographies and their characteristics as a genre. Perhaps they could even consider someone who inspires them and write their biography.