On a beautiful autumn day, Mr Walker sat in the back seat of the car feeling very excited because he was going to be the Guide Dog ambassador of a park.  Even though he didn’t know what “ambassador” meant, he loved parks, especially rolling in the dirt and playing fetch with sticks.

So he was really confused when the car stopped outside a tall building, and when he got out his paws slipped and slid on tile floors instead of gripping the grass he was expecting.  Turns out Mr Walker was going to be the ambassador for the Park Hyatt hotel in Melbourne. Because of his larger-than-life personality it had been decided that he would be better meeting and greeting the hotel’s guests, including important people and celebrities and raising awareness of Guide Dogs Australia.

Written in a chatty narrative that will appeal to all those who love stories about dogs, especially true ones, this book contains four illustrated stories about Mr Walker’s adventures at the hotel -where he still remains lounging on his custom-made Tasmanian oak bed. 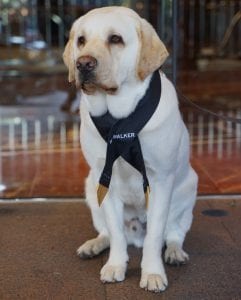 All royalties from the sales of the book are being donated to Guide Dogs Victoria.