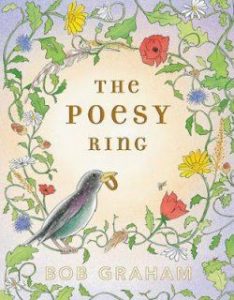 The Poesy Ring – a love story

Way back when, in this case in 1830 in County Kerry, Ireland, poesy rings were given as tokens of friendship and affection between lovers.  And way back when, just as today, bitter words can be spoken, relationships break up and rings discarded.

This one, aptly inscribed “Love Never Dies”, is caught by the wind, tumbling end over end and settles deep in a meadow near the sea where it lies for seasons undisturbed until a little deer catches it in its hoof as it eats the acorns from the tree that has grown ad fruited over the years beside the ring.  Then its adventure begins until over 200 years later it is placed on a new finger, showing that its message is as eternal as the land that has ensconced it.

This is Bob Graham at his story-telling best using the poetry of his words and the beauty of his illustrations to take the reader on a journey through and across time showing that the world and its living things keep turning and enduring offering hope and optimism even if things seem a bit bleak in the short term.  And it is the same with love and relationships – just as the ships that cross the ocean near the meadow sail through storm and war as the lighthouse guides them to safety – so the bonds between people can be tested, saved or severed.

Astute readers might pick up on the dedication at the front of the book and the date that the love story turns full circle – perhaps this has been inspired by something very personal to the creator.

While publishers’ and booksellers’ website suggest that this is a story for 3-8 year olds, it is so full of symbolism that it is a story for all ages.  Parents sharing it with their young children might need to offer a few explanations, pointing out how Graham has shown how time passes and love endures and once they understand the subtlety of the illustrations they will learn to look for the clues and cues by themselves, not only enriching their engagement with this story but enhancing their understanding of how top-shelf picture books work. It is a story that needs to read and then read again so the beauty of its message is as entrenched as the beauty of the prose and pictures.

Like so many of his previous titles, this is most likely to be on awards lists in 2018.