Bushfires are part of the Australian landscape and psyche.  Even though we know they are a necessary part of the life cycle of the indigenous flora, we still brace ourselves each summer hoping that we won’t be affected by one that season.  When they do strike though, news reports are cluttered with statistics of acreage burnt, homes and buildings destroyed, and too often, lives lost.  Seldom do we hear of the wildlife that is caught up in them, those that can’t clamber into a car and head to safety, although occasionally there are tragic photos of fields of dead sheep or heart-warming ones of a firey giving a koala a drink from his water bottle.

In this book, based on real events that emerged from the tragic Black Saturday fires in Victoria in 2009, we are taken to Tarnpirr Farm in Narbethong in north-east Victoria where trainer Alan Evett tried desperately to save the horses in his care. With expensive thoroughbreds to save, Evett had no choice but to set retired favourite Fabish and the seven young horses he led free from their paddock to fend for themselves while he cared for those he hustled into the stables.  All around the fire raged, Evett working tirelessly on spot fires and keeping the horse calm, while outside…

Thankfully, the fire dragon passed over the top of the building even though it ate everything else in its path and when morning came, Evett emerged to a scene of utter desolation.   Although he had saved the life of the racehorses. Evett feared he would never see his old mate Fabish again.  Climbing into an old ute that had somehow escaped too, he drove out through the paddocks to be met by more devastation and disaster.  Standing in the smoke-filled ruins of what had been his landscape and livelihood he mourned for Fabish and the yearlings until…

Together McMullin and McLean have brought to life not only the story of Fabish and all the other horses like him, but also the sights, sounds and the smells of a fire that once experienced can never be forgotten. Through carefully chosen vocabulary and evocative pictures the reader is drawn into the story hoping for a good outcome. The fire dragon is indiscriminate when it attacks and young children are often caught up in it just as grown-ups are, and their questions are often about the animals and how they survived.  In the aftermath when adults are busy doing the adult things they must, the children are often left wondering and so to have an uplifting story like this that not only demonstrates the determination and courage of those like Alan Evett who put their charges’ welfare before their own but also has a happy ending can go some way to alleviate their fear that everything is destroyed.

Sensitive in its approach, even those children who can remember the fires will relate to it although some discretion might be needed if there have been recent fires in your area because even though it is heart-warming we must be conscious of the memories it might evoke. For those who want to know more, Fabish was honoured a year later at the Healesville Picnic Races  and while Evett died not long after, his heroic story and that of Fabish are becoming more widely known as this book is shortlisted for the 2017 CBCA Eve Pownall Award.

A story for horse lovers as well as those exploring the impact of bushfires on the landscape. 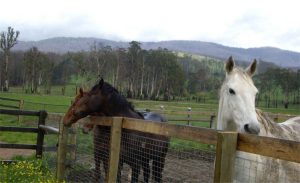