“Down on the rocky shore, waves crash and smash.  Then the tide goes out and the sea is calm. It’s a good time to explore the rock pools.”

For some the magnificence of high tide with the waves pounding the coast is their favourite sea-time – the tranquility of low tide is not dramatic enough for them. But what looks to be a peaceful, not-much-happening environment  is actually one of the greatest activity on the seashore because the myriad of creatures that live there have just a few short hours to feed and do what they do before the inexorable tide encroaches again.  You just have to take the time to look.

In this superbly illustrated new book from Narelle Oliver, she takes us on a journey around the rockpools pointing out things that might stay hidden to the non-looker exposing them underneath flaps that blend into the artwork as well as the creatures blend into their habitats.  The transparent shrimp in its leafy hideaway; the hermit crab in its seashell home; the anemones like seafloor flowers…each brought to life in their subtle colours in extraordinarily detailed linocuts  waiting to be discovered nestling in crevices, hiding in the seaweed or camouflaged on the rocks.. As well as the captions that accompany the text there is also a glossary with further information about the creatures featured that will inspire young beach-goers to spend some time looking and wondering and marvelling at nature’s disguises when they next catch the beach at low tide. 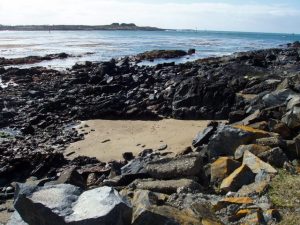 As a child I grew up in the very south of the South Island of New Zealand (next stop was literally Antarctica) and we were allowed to roam the rockpools all day (until the tide came in) so so many of my childhood memories are built around the discoveries we made.  Nowadays, when I get to the coast I head for the rockpools and do what I did way back when and spend many calming, healing hours just looking.

Armed with the beauty and knowledge from this book, perhaps there will be a new generation of hunters inspired to look a little closer, tread a little more gently and delight in the hidden wonders especially as summer draws to a close and many are making a last trip to the beach until the warm comes again.

Over the years of her too-short life, Narelle Oliver has brought nature to life for young readers in her exquisite works like The Hunt, Leaf Tail, The Best Beak in Boonaroo Bay, Fox and Fine Feathers, Sand Swimmers and for her final work to be one that focuses on my favourite environment is just superb.

Vale Narelle.  You gave us so much and we are indebted to you.  Thank you.