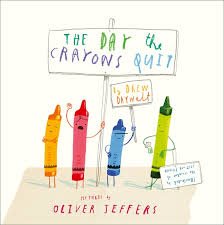 The Day the Crayons Quit

The Day the Crayons Quit

One day, in class, Duncan went to take out his crayons and found a stack of letters with his name on them.  Each letter was from a different-coloured crayon explaining why they didn’t want to work anymore.  Red feels overworked, constantly colouring in fire engines, apples and strawberries, even working in the holidays colouring Santas and Valentine hearts.  Black is bored with just being used for outlines and craves things such as black beach balls while poor peach has had all the paper peeled off and is too embarrassed to leave the box! So Duncan decides to do something about it… and ends up making all the crayons happy!

The Day the Crayons Quit has consistently appeared on all the best-reads and must-haves lists that appeared at the end of 2013 and with good reason.  It is delightfully original and has many layers to it, with each audience being able to take something from it at their level, whether it be “What other things could Duncan colour purple?” to investigating whether it’s OK to have an orange whale.  I’m very much reminded of Flowers are Red by Harry Chapin  There are lessons to be learned about stereotyping – something we strive to make students aware of but modern literature doesn’t readily allow it because authors strive to avoid it!  You could also use it to explore emotions and feelings and how we can tactfully express that things are making us unhappy.  So just as the crayons express why they are unhappy, perhaps this could be a model for each child to express why they are happy.  Because this book has received such acclaim, there are many suggestions for how it might be used online accessible by a search.

Each letter is written ‘by’ a crayon using a font that might make this story difficult for the emerging reader to read alone, but it is a perfect read-aloud for many ages!  Jeffers’ illustrations have an authenticity about them – they look like they have been drawn and coloured by young children and the credits suggest that there has been significant input, either physical or intellectual, from them. And this provides another level to the book – my experience is that children start to believe that their drawings are not worthy because they don’t have the realism they see around them or the professionalism of book illustrators, so seeing pictures that look just like theirs in such a popular book validates their efforts and hopefully encourages them to keep drawing.

I borrowed this book from my public library because I wanted to see what the fuss was about, but it is now on my to-buy list so I can share it with Miss Nearly 3 and Miss 7 because it will appeal to both.  That’s the greatest accolade I can offer. 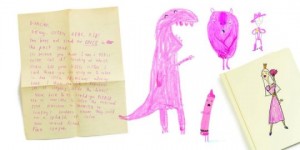